You are here: Home / Online Relationship Advice / Are You in an ‘Inter-Intimate’ Relationship?

For some couples, having different nonsexual intimacy preferences can be a strain on the relationship. Here’s how to meet in the middle.

There are many ways in which we show our love for our significant others, and we all need and want different amounts of emotional and physical intimacy. While couples with differing sex drives face hurdles, many couples may also be involved in “inter-intimate” relationships, where each partner has different preferences when it comes to giving and receiving nonsexual affection.

“‘Inter-intimates’ describes the incongruent needs and desires that exist between people in a relationship, which inevitably will be mismatched at various times,” said Damon L. Jacobs, a marriage and family therapist in New York City.

That was the case for Marsia Belle when she met her husband of four years, Adam Brown. “I am a married woman with a lot of affection to give,” said Ms. Belle, a 27-year-old Ph.D. student at Regent’s University London. “When I first met my husband, he was different and didn’t consider nonsexual physical touch or physical affection a necessity.”

The problem plagued her dating history. “Because my past relationships lacked physical closeness and nonsexual intimacy, arguments and problems would more easily break trust, loyalty, and other important values,” Ms. Belle said. “Breakups would be easy and unstoppable.”

Touch is a form of intimacy distinct from sex, with its own set of rules that can threaten to undo romantic entanglements.

“Mismatched needs for affection and touch are common in relationships,” said Mr. Jacobs, the therapist. “If you think about it, it’s quite rare for any two humans to be in complete sync at all times during the course of a long-term relationship.”

Samuel Twumasi, 33, an economic development officer, and Rhoda Twumasi, 34, a communications professional and content creator, had a rocky first year of marriage because of their mismatched affection.

“It caused a lot of stress, phone calls to his mother — I was desperate,” said Ms. Twumasi, who lives with her husband in Yorkton, Saskatchewan. “We wondered if getting married was a mistake in the first six months because we just did not understand how each other communicated or what the other person needed.” The couple also struggled with infertility, which added to their stress.

“Problems can arise if one partner feels ‘skin-starved’ and the other feels that they offer enough affection or doesn’t prioritize affection and physical touch as integral to the success of the relationship,” said La’Tesha Sampson, a clinical social worker and the founder of Great Joy Counseling and Consulting Services in Clark, N.J. 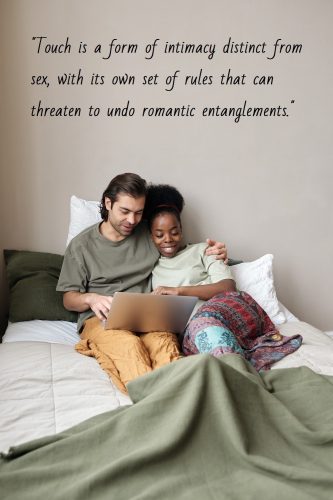 Reneze Lopez, 25, a travel and style blogger in Henderson, Nev., and Gary Goodman, 52, a licensed pharmacist turned stock trader in Las Vegas, have been dating for four years. Ms. Lopez said that their conflicting intimacy styles have put a strain on their relationship.

“I have definitely realized that affection plays a huge role in a relationship and it takes a lot of work,” said Ms. Lopez, who seeks more affection than Mr. Goodman. Communicating with one another, particularly when emotions are running at a low heat rather than a boil, has helped them see and hear one another.

Regardless of quantity, physical affection plays a biological role in one’s happiness. Oxytocin — sometimes called the “cuddle hormone” — releases at higher levels in moments of physical affection, and research has pointed to its health benefits, according to Paula S. Barry, a physician at Penn Family and Internal Medicine Longwood.

Mike Lee, 43, a life coach and certified matchmaker, and Amber Lee, 41, also a matchmaker, of Richmond, Va., have been together for 11 years and are engaged to be married. The couple has navigated divergent levels of affection for the duration of their relationship, with Mr. Lee needing more affection and Ms. Lee wanting less. They have managed to steer through it by communicating and injecting a little humor into the situation.

“We have learned to be playful and tease each other about our preferences for affection,” Ms. Lee said. “Mike will literally lick my face if I am not giving him affection when he desires it. This playfulness helps me to loosen up and helps him to get the attention he desires from me as we laugh and enjoy each other.”

So how do you reconcile your inter-intimate relationship? “Proper communication about affection wants and needs should occur often in the relationship,” Ms. Sampson, the social worker, said. “Rituals should be clearly identified in order to foster and maintain equilibrium. Couples may want to kiss good morning and good night, embrace one another upon greeting or ensure there is cuddling before or after sexual intimacy. It is important that both partners meet in the middle and constantly adjust to ensure the other partner’s needs are met.”

With time, the Twumasis learned how to communicate their needs to one another. “He would ask straight up what I needed from him in terms of affection, and I’d tell him, ‘Hold me, hold my hand, just sit with me,’” Ms. Twumasi said.

The same goes for Ms. Belle and Mr. Brown, her 31-year-old radiographer husband. “We have worked on this together over the years, and he now understands that little acts of love and nonsexual intimacy can be a nice daily or hourly reminder of love,” Ms. Belle said.

When broaching the topic of inter-intimacy with your significant other, it helps to approach calmly and seek to understand and inquire rather than complain or demand.

Start with a mutual understanding that demands kill affection, Mr. Jacobs said. “None of us can fully be open and vulnerable when there are consequences attached to not feeling open,” he said. Once an understanding is established, work on aligning on what your needs and wants are and create that space for intimacy. Then, schedule a “touch session,” he said. The goal shouldn’t be sex, he said, but to “connect without any expectations.”

Good communication, a curiosity to understand what makes your significant other tick, and an active interest in meeting these needs is the formula for success in any relationship. In an inter-intimate relationship, it can be the saving grace.

Still, inter-intimate relationships aren’t all doomed from the get-go.

Emily Grace Bergh, 39, a publicist, and Colter Reid Bergh, 33, a software engineer, who live in Keene, N.Y., have been together for three years. They were both married with two children each before meeting, marrying and having a child together. Ms. Bergh requires more affection, whereas Mr. Bergh describes himself as “steady and non-emotive,” but the two complement each other. “Our personalities are extremely different but somehow work magically,” Ms. Bergh said.

Part of what makes their relationship work is a concerted effort from both parties. Mr. Bergh actually sets an alarm on his phone for cuddle time every Thursday night to meet his wife’s expressed need for physical affection, a tactic they came up with on their own. Ms. Bergh knows when to give her husband space. “For both of us, affection and nonsexual intimacy is the foundation to our relationship,” Ms. Bergh said. “With five kids, full-time jobs and currently renovating a house on a mountaintop, we have to make time to connect. It does not just appear for us.”

If you aren’t getting the affection you need in your relationship, there are other options that don’t involve divorce or devastation.

Betty Martin, 70, is a sex and consent educator in Seattle and a board member of Cuddle Party, a nonprofit organization that facilitates gatherings in more than a dozen countries where participants can exchange physical affection. Alcohol, racy negligee and sexual intentions are not welcome. Sparkling apple cider, cozy pajamas and consent are encouraged.

More than half of the Cuddle Party attendees are single, while some come with partners and others are in relationships where they aren’t getting enough affection at home.

“If the only touch you get is in sexual activity, then you are missing out on a basic human need,” Ms. Martin said.